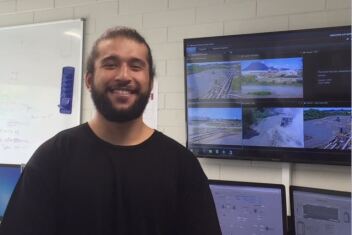 During the 2017/18 summer holidays Tuwharetoa employed a Summer Student - Mareko Fagasa-Nuku. Mareko is a young local man from Kawerau and a beneficiary of Ngati Tuwharetoa (BOP) Settlement Trust. He is an all-round achiever with an impressive academic record and several sporting achievements. This year Mareko is attending Auckland University in his third year of study towards a Bachelor of Engineering (Honours) specialising in Mechanical Engineering.

During his time with Tuwharetoa, Mareko has worked in the steam field on preventative maintenance routines, assisted with the clean steam heat exchanger bundle leak repair, and on the DSC screen at home base. He has also gained experience in various general engineering work practices with local engineering and maintenance company Hutec. Through his employment with Tuwharetoa, Mareko has been able to see and use the theoretical engineering knowledge he has learned in practical applications on the steamfield.

Mareko has been well received and has impressed all who have worked alongside him. He has a bright future ahead of him and his academic achievements to date show that hard work and dedication pay off.

In his own words “NTGA has given me the opportunity to:

We wish Mareko all the best for his study and hope to see him back with us for the 2018/2019 summer break.