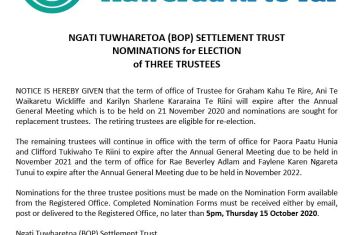 NOTICE IS HEREBY GIVEN that the term of office of Trustee for Graham Kahu Te Rire, Ani Te Waikaretu Wickliffe and Karilyn Sharlene Kararaina Te Riini will expire after the Annual General Meeting which is to be held on 21 November 2020 and nominations are sought for replacement trustees.  The retiring trustees are eligible for re-election.